Get Your Tickets NOW!
Alamo Drafthouse Mainstreet is pleased to announce the screenings of two highly anticipated new Japanese animated films in January. First up is EVANGELION 3.0: YOU CAN (NOT) REDO which screens Monday, January 13th at 7:05pm with an encore Wednesday, January 15th at 7:00pm.

Also showing in January is a FREE screening of the first four episodes of Season One of the popular animated television series JORMUNGAND. This screening is a One Night Only event that will occur Monday, January 27th at 7pm at the Alamo Drafthouse Mainstreet. This screening is FREE; however, a $5 voucher is required to reserve your seat which can be used towards food and drink.

Purchase your ticket for EVANGELION 3.0 at http://drafthouse.com/movies/evangelion-3.0-you-can-not-redo/kansas_city
Reserve a seat for the JORMUNGAND event at http://drafthouse.com/movies/jormungand/kansas_city
Tickets for all screenings and events are always on sale at http://drafthouse.com/kansas_city/mainstreet.
Showing on January 13th and 15th is the latest chapter in the tetralogy “rebuild” of the original anime series NEON GENESIS EVANGELION entitled EVANGELION 3.0: YOU CAN (NOT) REDO.  A gigantic hit in Japan, the series revolves around a young pilot, Shinji Ikari, navigating a giant ‘mecha’ called the Evangelion which has been designed to protect the planet from giant terrifying creatures known as ‘Angels’.
The latest entry begins with Shinji Ikari just waking up fourteen years after starting cataclysmic incident known as the Third Impact. He hasn’t aged, but everything else has changed. The earth is in ruins. The people he once protected treat him like a prisoner and threaten to kill him if he pilots another Eva. At NERV headquarters, Shinji meets a quiet pianist named Kaworu. As the boys bond, the organization’s true mission comes into focus. Lost in a labyrinth of deception, Shinji careens toward a mental breakdown that could bring about the end of humanity.
Purchase your ticket for EVANGELION 3.0 at http://drafthouse.com/movies/evangelion-3.0-you-can-not-redo/denver
For more information about the EVANGELION series and Eleven Arts Entertainment go to: http://www.elevenarts.net/evangelion3.html

Adding to the anime fun, a very special FREE screening will occur at the Alamo on January 27th of JORMUNGAND, a hit Japanese television series which is about to debut its highly anticipated second season, and hot on the heels of Season One’s release on BluRay/DVD we will screening the very first four episodes on the big screen!
In the series, Jonah is a child soldier and the newest bodyguard for Koko, an international arms dealer with an entourage of hired guns. The cold-blooded kid hates Koko’s line of work, but following her into the darkest corners of the black market might be the only way he can find those responsible for his family’s slaughter. Besides, his employer isn’t like most merchants of death. She uses guile and cutthroat tactics to keep her clients armed to the teeth—all while cultivating her own warped plan for the future of world peace. With the CIA desperate for her capture, assassins eager to collect her head, and the potential for every contract to end in ultra-violence, Koko and her comrades in arms bring the boom to every corner of the world.
This is a FREE Screening but you can reserve your seat with a $5 Food & Drink Voucher which use can use at the screening. Reserve your seat here: http://drafthouse.com/movies/jormungand/denver
For more information about JORMUNGAND Seasons One and Two and Funimation Entertainment go here: http://www.funimation.com/shows/jormungand

Local animator Lyn Eliot, creator of "Another Dress, Another Button" is raising funds for her newest project.  She is co-directing the five-minute film "I Was a Teenage Girl, Apparently" with New York based animator/illustrator Nina Frenkel.  Eliot serves as the film's writer and editor.

Both film makers have started a Kickstarter campaign to hire more Toon Boom animators.  Given proper funding, they believe will get to see the film in August of 2014.  They are offering up some wicked prizes for those who help.

"A short animation about a woman who finds her twenty-year-old diary, and goes back in time to talk some sense into her teenage self." - Kickstarter Campaign
Posted by Unknown at 9:39 AM No comments: 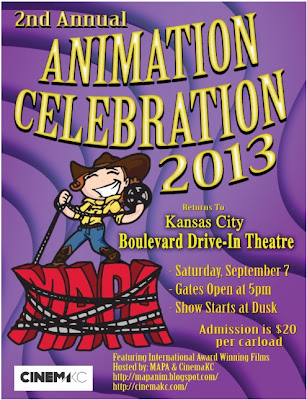 Final Line-Up for the 2013 MAPA Animation Celebration to announced soon but here are some highlights... 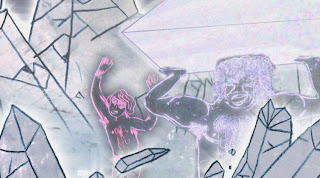 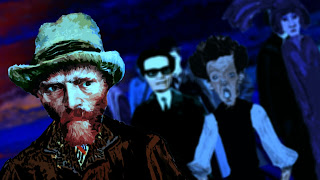 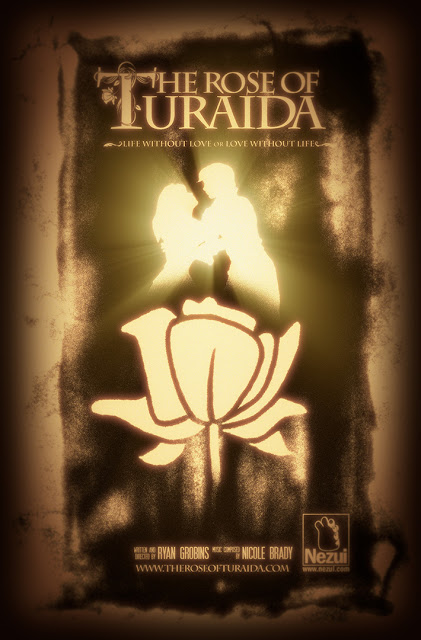 CinemaKC Short Film Showcase 2013
CinemaKC
Description: CinemaKC - a not-for-profit organization dedicated to bringing the film community of the Kansas City area together to create awareness and collaboration - presents a special collection of short films from some of the most talented filmmakers from the heartland. This fresh showcase of eclectic, funny, thought-provoking, animated and entertaining programming features some of the best pieces from the award-winning television show, CinemaKC, things unable to be shown on TV, and classic and rarely seen gems.
Artist Website: http://www.cinemakc.com
Length: 90 minutes
Ticket Price: $5
Schedule:
Sun 7/21 3:00 pm
Sun 7/25 6:00 pm
Fri 7/26 9:30 pm
Venue:
Screenland - Crown Center
2450 Grand Blvd.
Posted by Unknown at 7:40 AM No comments:

Promote Your Page Too